The women, striking in their sevillana dresses,
gaze down at him with their amorous hearts,
and from behind vibrant hand fans,
they caress the cape of his courage
with the suspense in their admiring eyes.

And the men, dark and swarthy, their handsome faces
as if struck from the granite of Sierra Morena,
wear short jackets and open, white shirts, from which
tufts of dark curly hair rise and fall on virile chests.

Sometimes the women allow the heat of furtive love
reach the matador from afar, as he coolly circles
the inside of the bullring and solemnly salutes them
with his three cornered hat and like a gladiator,
he recites these ancient Roman words,
“for he who is about to die, we salute you.”

With the match of his black, olive stone gaze,
he sets aflame the whole colorful arena,
before turning to face the black thunderbolt
of wrath that catapults from captivity into the ring.

The bull radiates the trapped sun energy
of its furious blood to wash in waves over the crowd,
and breaks the crystal space around the waving crimson cape
into hundreds of shards of glass that rain down on its back.
As it passes through the man’s exposed and delicate body,
a horn leaves a red furrow of broken clothe and skin.

Dynasties of bullfighters unravel from the DNA
of his blood stream and surge to the forefront,
coming to his aid as he turns and braces himself
for the animal’s next fatal charge.

Like a swaying cobra, the wounded bullfighters’
lithe gold-burnished body swings in slow, hypnotic circles
and the menacing black beast now charges,
not for the cape, but for the man’s glistening, bloody chest.

Yet the lightning quick silver of his sword
strikes deep into the heart of his foe,
which collapses, like a juggernaut, onto the sand.

And only later, amidst the stricken silence of the ring,
does the creature once again raise itself off the yellow ground
and with noble gait and a head crowned with thorns,
it disappears through the Gate of Death,
while its soul flows through the other Gate of Life,
and back into the essence of the great spirit,
like a dream that once again enters the ocean.

Posted in Poems of Andalusia. 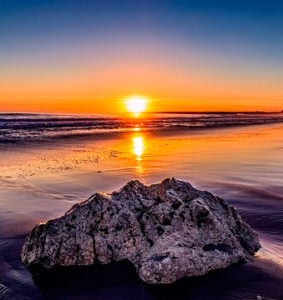